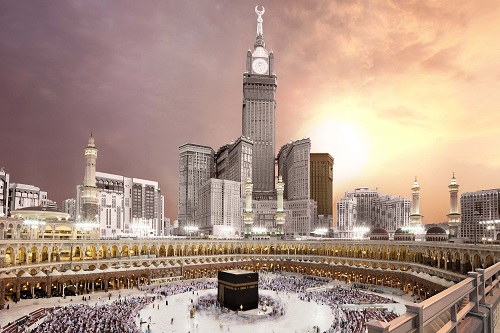 Based on the approach taken by the founder King Abdulaziz, may God rest his soul, and his righteous sons after him, to be watchful over the Two Holy Mosques and to the benefit of the pilgrims and Umrah performers and visitors of the sacred House of God, the Custodian of the Two Holy Mosques, King Fahad Bin Abdulaziz – may God rest his soul – endowed “Ajyad Fortress”, including its facilities and lands pertaining to it on the Holy Mosque, and ordered the implementation of a giant project called the Endowment of King Abdulaziz on the endowment land. The foundation stone of the project was laid by King Abdullah bin Abdulaziz – may God rest his soul – on 28/11/2002 AD, and the project was officially completed on 20/01/2007 AD. It was designed to become an upscale architectural edifice, consisting of residential center of seven towers, a huge shopping mall, central markets, and a restaurant area. The endowment is located above the Fortress Mountain overseeing the courtyards of the Holy Mosque. The largest consultancy offices were assigned to prepare financial and economic feasibility studies for the project, determine the size of the market available for the establishment of the project on the land of the endowment, and determine the market specifications for it, with analyzing the elements of the investment environment in Mecca. The endowment buildings also highlighted the aesthetics and Islamic architecture, and preserved the environment, as the facades of the endowment buildings reflect the ancient Islamic architectural character, befitting the importance of the project and its location near the Holy Mosque, as the endowment is considered a full-service city. What distinguishes the endowment of King Abdulaziz is its proximity to the Holy Mosque, and its direct linkage to the external courtyards of the Mosque. On top of the endowment, is the highest and largest clock tower in the world, containing the largest emblem of the Kingdom, topped by the largest word (AlJalala – Majesty) with the largest Islamic crescent in the world. It is one of the largest residential and commercial buildings in the world, in terms of the size of the buildings, as the project surface covers (1,500,000) million square meters, consisting of 7 adjacent towers, at different heights, as the main tower reaches (601) meters, and accommodates a large number of visitors and guests of Rahman (Doyof Al Rahman) reaching up to (65.000) people, and the capacity of the mosque located inside the complex is about three thousand and eight hundred worshippers. The project is the first of its kind in Mecca, in terms of building, operation and transfer, known internationally by (BOT), as the total cost of the project was more than two billion riyals, and in terms of the investment contract, where the duration of use is (35) Hijri years. The disbursements of the endowment are meant to benefit and service the Holy Mosque. The endowment of King Abdulaziz is distinguished by the following: